So we're gonna nail him on comics, then.

Far be it for me to quote the Onion (I'm sure enough of your friends do this for you) but how could I let Tuesday's story about our new President go unmentioned?

And allow me to give you the accompanying priceless graphic: 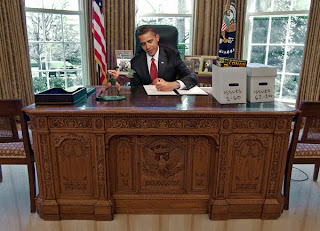 I have read and heard a lot lately about how comedians are scrambling to get something to mock Obama for. A few folks (Jamie Fox and SNL's Fred Armisen) have gotten laughs out of his strange speaking cadence, but other than that, what is there? SNL seems to have settled on, for now, making jokes that Obama is simply too cool. Until our new President makes a serious policy flub or reveals a somehow unseen nervous tic or something... there's not a ton to work with that's actually funny.

The Onion's present answer is to turn to comic books. And honestly I think that is pretty cool. If our humor regarding one of the most powerful men on the planet comes from insinuating that he knows obscure facts about a mid-70s Marvel fantasy comic and not that he, you know, ruined our country in a shockingly brash display of idiocy... maybe times are not so bad after all. Besides, it's attention for a medium I love. One might argue that it is negative, mocking attention, but I don't think so. After all, if comics are the source of Obama's mockery, we must think Obama is pretty okay... and he thinks comics are okay so... well I'm not very good at math, but I think if you use the transitive property or something it turns out that we're probably all okay with comics too.

I have to point out that I'm a little dismayed that Obama seems to be a clear-cut Marvel fan (the Onion even takes up this point). I truly wish I could sit down with our new President and discuss the neat subtleties of Geoff Johns and Phil Jiminez's Infinite Crisis. I do. But hey, I'll take the Spidey/Conan love in exchange for four to eight years of good leadership. I think that's an alright price to pay. Maybe one day Illinois Lt. Governor Pat Quinn and I can have a tete-a-tete about JLA, if he's not too busy. A guy can dream.
Posted by Eric Garneau at 3:07 PM