In comics, Obama being alive is like Superman being dead.

Or so it seems, as over the past few days the shop has been flooded (relatively speaking) with requests for next week's Amazing Spider-Man #583 featuring President Elect Obama fist-bumping the titular hero in a relatively poorly-drawn picture by Todd Nauck: 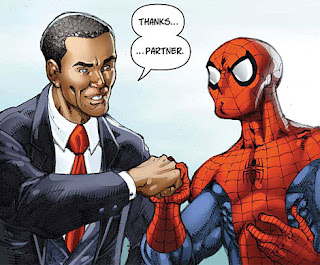 (Apparently Mr. Fantastic & co. didn't get rid of all the Skrulls...)

(Okay, obviously I'm just joking, but wouldn't it be funny if a plot point of this issue was that there is still a Spider-Man Skrull running around?).

And, I don't know how I feel about this. I mean, it's gonna be alright for business. It could have been AWESOME for business if we had anticipated just how popular this book would be... and talking with some other shop owners, they didn't do that either. I kind of feel like Marvel should have just overshipped a shit-load of these books, made them totally returnable, and said "trust us, these will sell out." It is a bit hypocritical to blame Marvel for making the same mistake that I made (namely, not knowing how popular this book would be), but on the other hand they've been in the business a lot longer than I. (Props to Marvel, though, for rushing out a second printing ONE WEEK later. That is slick.)

And gimmicky stuff like this, I dunno, it gets to me. Like, it is cool that Obama is president in the Marvel U and it is cool that that is driving people into comic shops (note: it is cooler, by a gagillion times, that Obama is president in the Real U). But few to none of these people will come back. And that is not anything to blame anyone about... it just makes me sad. So the point of this post, I guess, is to say I'm sad. Also I am apparently a 15-year-old high-schooler whose favorite band is From First to Last or something like that.

This could be good for comics, don't get me wrong. The Death of Superman was beneficial for a few years (and also was probably very, very bad in the long run, but who has time to think ahead in today's economy, am I right?!), and the Death of Captain America good for a few weeks. It just kind of breaks my heart a little when people rush into shops to get some milestone issue and don't ever come back. It's like, guys, comics have more value than that. There are great stories and artwork inside lots of them (potentially already inside Amazing Spider-Man, which I understand has been pretty solid lately). And the only way to really convince people of that is to sell them their gimmick book and do it with a good attitude and a smile on your face and hope they come back to read a little more. Of course situations like this make it hard to please customers because the product is obviously going to be scarce (I already ordered more second prints of this Spider-Man issue than I would normally order first prints of any other Spidey book). But the ones you do please... hopefully, they'll come back.

I guess having a guy in the White House who reads Spider-Man and Conan doesn't hurt.

(And can you imagine a Conan comic featuring Obama? Dark Horse, get on this).

In other comics-plus-black-people-in-major-media-outlets news, Newsarama's Matt Brady for some reason has an article about black Kryptonians over at MSNBC, which you can find here. And unlike all the Obama coverage, which just kind of grinds my gears a little bit in a stupid way, this article actually bothers me.

First of all, click that link and check out where it's placed within the MSNBC website. It is: the "Technology and Science" section. Um, what? Unless Krypton is a real planet and scientists have just discovered some new skin pigmentation on some of its residence, I don't see this as science or technology. The fact that the story probably most appeals to "science-fiction nerds" is, I'd wager, the reason it is under that heading.

And the text of this article... my lord. In case you couldn't tell, I am a pretty liberal guy. I balk at some folks' insistence that there is a "liberal media." And yet... this article would almost make me believe. Check out winning lines like "an America finally enlightened enough to elect a black man as President." I'm glad that Matt Brady of Newsarama is qualified to tell us that we are now enlightened. I am sure the millions of non-racist Americans of decades past can now breathe a sigh of relief at this inconsequential article's assertion that America is finally enlightened.

Sorry. This just pisses me off. First of all, it isn't news. Who cares that we can now glimpse black-skinned people on Krypton, besides Matt Brady and apparently someone at MSNBC? I mean, Krypton is an alien world. It's not like Kryptonians being black relates at all to real people being black. The color of any Kryptonian's skin should be fairly meaningless to us readers because we have no idea of the social, cultural, or political backgrounds that come along with it. Black Kryptonians might as well have been orange or magenta; it should change our interpretation of the story not at all.

Second, does no-one proofread these things? This article is really poorly-written and condescending. There are fragmented sentences and opinions expressed as facts. It would be fine for Newsarama, but MSNBC. Science and Technology?!

I guess in the end I just feel like, if comics are going to break in the mainstream news, it should be over something that matters. And sure, Barack Obama's appearance in does, to a degree, matter (black Kryptonians do not. And I think James Robinson and Geoff Johns might agree). But, for instance, no one came rushing to the shop when Oprah Winfrey picked Sara Varon's Robot Dreams for her Kids' Reading List last year (the first time she had ever recognized a graphic novel). This story, maybe the biggest achievement for comics in the mainstream in 2008 (besides potentially The Dark Knight/Watchmen) was not really covered by the news. In fact searching MSNBC's website for "Sara Varon" turns up nothing. "Black Kryptonians," though, gets a hit. I just feel like there is something fundamentally wrong with that.

In a weird bit of synchronicity, the Spider-Man issue in question is #583, while the Superman is #683. Anyone who wants to have some fun: figure out what major comic book will next hit issue #x83, and then conjecture how can a black person make a noteworthy apperance in that book.

Meanwhile, I will be dreading the hordes of callers who want their Obama book. Fortunately, they have only a week to wait, and they have the inauguration of our new President to hold them over.
Posted by Eric Garneau at 1:05 PM