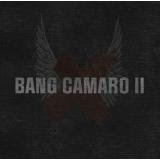 That means the album is now available in Best Buy, Wal-Mart, and Hot Topic stores around the nation. So hey... go buy it!!

Seriously... this is a really cool album from a group of guys who deserve to be famous. And I think they're well on their way... appearing on Conan O'Brien is nothing to scoff at, after all. And trust me when I tell you that this is one of the most fun albums I can imagine listening to... these songs will simultaneously make you smile and fill your veins with blood red rock. I think the disc's standouts for me are "She's Gone (Critical)," which is a song about launching your crazy girlfriend into space (it even employs a David Bowie/"Space Oddity"-style countdown for the bridge) and "The Hit," a sensitive ballad about not lying to girls so you can fuck them (I think that's what it's about... I dunno, I just listen to the song waiting for the sweet guitar solo to kick in).

Here. Just look at this video of the first single from the album, called "Night Lies."