Here are some more cool blogs to read!!

This is something I like to do from time to time... point out good stuff on blogs other than mine, because a lot of these sites are cool enough to demand exposure, and because it is a great filler for when I don't know what else to post!

The last two times I did this I worked the blog name into a pun, but I won't do that this time. A few of those blogs that got my pun treatment have since stopped updating, and I can only assume it's because of my terrible jokes. So, Mark and Emily, I am deeply, deeply sorry. I should be... punished?

Okay, that's the only one, I swear.

Covered: This is a really cool art blog whereby indie comics artists do their own versions of classic comics covers. Lots of fun to look at! Here is yesterday's entry, by The Man Who Loved Breasts artist Robert Goodin: 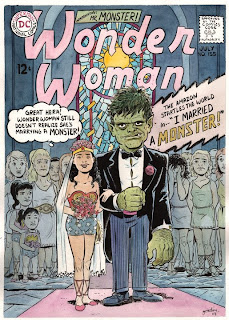 Deep End of the Long Box: This blog, run by my friend Mike, is premised on the treasures (or crap) you find when you finally read those comics you bought years ago for the sole reason that they were super-cheap. I think this is a really unique and interesting concept; I don't believe I can name any other "random back-issue review" blogs. Visiting his page is like spinning the big wheel on the Price is Right... you never know what you're going to get, and maybe Drew Carey will heckle you a little bit.

GeniusBoyFireMelon: I'm not sure why this blog is so named... perhaps it's explained in an earlier post... but I know that its author, Timothy Callahan, is one of my favorite writers in the field of comics criticism (it is sadly a small field, but Mr. Callahan would be awesome no matter how much competition there was). I own his book Grant Morrison: The Early Years, which is a fantastic look at Morrison's career from Zenith through Doom Patrol, and I really really hope that a book covering Morrison's later stuff (JLA, All Star Superman, Final Crisis, Seaguy, etc.) is on the horizon. He's also written a book on the Legion of Superheroes called Teenagers from the Future. The point is that his writing on comics is thoughtful, incisive, and awesome. He often reviews hordes of comics that come out every week, and I always love to hear his opinions.

You Ain't No Picasso: Screw Pitchfork, this is my source for indie rock on the net (and actually, comics do come up every now and again). You will often find cool videos or new MP3s; there seems to be a focus on obscure, neat covers (I must have downloaded like 60 different songs Of Montreal covered off this site). Bonus, if you go there soon, down at the bottom of the page you can catch a video of this really sweet Pepsi commercial featuring The Who's "My Generation." Seriously, it's really cool.

Actually, you know what... watch it here. Then go to this site because it will show you more cool things like this: