Here is an amusing thought about national security.

With pretty much every comics shop on the planet preoccupied and dealing with President Elect Barack Obama this week... just think about how much comic-related stuff Secret Service agents have been forced to wade through in the interest of security. Every blog post about the Obama variant, every comic-shop email that talks about Amazing Spider-Man #583... it's probably all being scrutinized at this very moment.

So, my friends in the Secret Service, I hope you enjoyed my first post on Marvel Comics' Obama variant cover to this week's issue of Amazing Spider-Man. And I trust you understand that when I said the Spider-Man meeting President Obama was a Skrull, I was joking. I further hope that you did not assume these "Skrulls" to be a threat to our great nation because, well, they're clearly not. They may pretend to have a master plan but really a 20-minute battle in Central Park plus a Norse God of thunder will make their best-laid plans crumble like so many George W. Bush attempts at logical argumentation. Also, please tell our new President that Norman Osborne should not, not, NOT be trusted under any circumstance. Yes, he is sauve and has cool hair, and he has nice suits and stuff. But seriously... I think he's up to something. I'm not saying anything about anything but you may want to ask a Peter Parker what he thinks about this. Or maybe ask Gwen Stacy... OH WAIT. 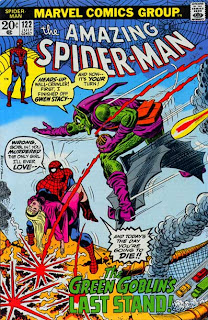 I trust the real Obama will do a better job than the Marvel one.
Posted by Eric Garneau at 9:16 AM