because, to be honest, many of them are not very good. Every so often, though, a standout act will make themselves known. I had the pleasure of listening to one such band last night. In a show filled with talented acts of different genres (also of note: Kindle, Virus Attack, The New Yorker), I could not get enough of the second band to play, a group called Nate & His Kite. 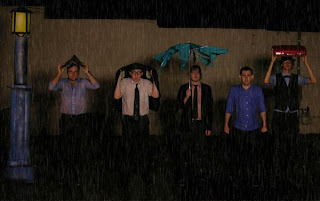 These guys are awesome, awesome, awesome. To me, they kind of sound like a mix of They Might Be Giants and Queen... although that description probably doesn't do justice to any of the three bands it refers to. But my musical knowledge does not go deep enough to find a true analog for Nate & His Kite, whose musical styles include straight-up guitar rock, Billy Joel-style piano kickassery, bits of electro-pop, and most amusingly, vaudeville. Sadly they do not have any videos on YouTube, and there doesn't seem to be a way to upload MP3s to Blogger, so I can't embed any music of theirs. But if you trust my taste at all, I recommend you venture over to their MySpace page and listen to at least one of their songs. I would first recommend "NES <3", the song I first fell in love with, which has an outro you can't get out of your head. If you want more, listen to "Sway" for a taste of their amazing arrangement abilities and backing vocals (this is where I most see the Queen influence).

These guys are truly fantastic; I cannot stress enough that if you live in the Chicagoland area, you should check them out. Their next show is Tuesday, January 27 at the Elbo Room, and I reckon I am gonna be there. Now the question is... will YOU?!
Posted by Eric Garneau at 4:23 PM