This Sunday is the first official meeting of Stand-Up Comics' (Comic) Book Club, a project near and dear to my heart. I am really excited about the prospects of this club and through it I hope to both discover some great graphics literature and maybe turn on a few new people to the medium as well. The first book was chosen by Pat, one of the other owners of Stand-Up, and he has picked... 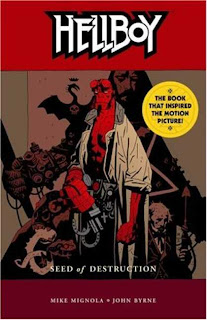 Mike Mignola and John Byrne's Hellboy volume 1: "Seed of Destruction." I have never read a Hellboy comic before and I only saw the movie once years ago, so I am pretty excited. I'm glad, at any rate, that the first book we're reading is one I am unfamiliar with, because exposure to new texts is the point of this whole thing. I also like Hellboy as a choice because he kind of straddles the line between superhero/mainstream and indie, and because he's a character that facilitates the discussion of the relationship between comic books and other mass media, which I believe is a really important topic these days, especially inasmuch as it's one of the main reason that kids hesitant to read will pick up a comic book over, say, Of Mice and Men (note: Of Mice and Men is a really fantastic story. But maybe if kids saw Lennie kicking ass in a weekly cartoon series, they'd be more inclined to read it, huh?).

I've not yet done my homework and read the book, but that's partially because I've been busy and partially because I want the thing to be really fresh in my mind come Sunday. I'm also going to take notes. Pat will be leading the discussion on the book but I may come up with some interseting thoughts about it on my lonesome, so you may see an analysis of this thing a little bit down the road.

At any rate... Hellboy vol. 1, "Seed of Destruction," 4:00 PM Sunday, at the Lansing, IL Baker's Square (southwest corner of Ridge and Wentworth). It's gonna be a sweet time.
Posted by Eric Garneau at 2:45 PM