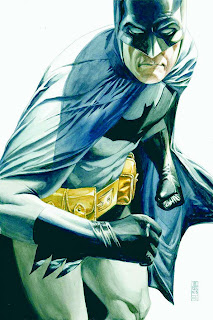 I'm not gonna spoil anything but... man. Final Crisis #6 was a weird reading experience. I can't think of too many comics where the weight of what happened didn't really hit me til after I put it down. I guess that's a good sign that I'm really caught up in what's going on.

There were a lot of twists, surprises, and otherwise notable goings-on in these pages, and there is a great interview with Grant Morrison about this biggest one of them all over at the Wizard website (note: this DOES include spoilers. Hell, even the html page name contains a spoiler). And although I don't want to talk about the meat of the interview yet, except to say that when you think about it what he says should be fairly obvious (once I read it it was like, "well duh, why didn't I think of that?"), I'd like to pull out this quote, more related to comics in general, which I really liked:

Once you've seen "Iron Man" and "The Dark Knight," why bother doing realistic superheroes because now the movies can do them better than anyone. I kind of feel that what it does is free up comics to be a little bit wilder. We've got great artists who can sit there with their pencils and draw anything. They're not limited by budgets. We shouldn't be following the storytelling techniques of Hollywood because they can do it really well. Comics can do all kinds of other things. They can be really crazy and wild and can really stretch the imagination and be really progressive.

This is a point that I feel bears repeating again and again and again. Why do people insist on seeing realism in super-hero comics? The Dark Knight has done the realistic superhero better, I think, than any comic ever could. But there is this feeling among certain comic creators and fans, I think, that comics are just cheap movies, or prototypical storyboards that somehow become more legitimate when they're put to the big screen. To put it bluntly, this is a stupid way of looking at things. Morrison and other creative comic talent (off the top of my head: Geoff Johns and Joe Kelly are two other examples--and I will speak about Joe Kelly's excellent I Kill Giants book at length later) are showing us that comics should not be beholden to the standards of Hollywood, but rather to their own set of standards, which cannot do everything a movie can but which can do some things better.

I think Scott McCloud would be proud.
Posted by Eric Garneau at 12:52 PM