was great. Well, I had a great time, anyway. The convention was okay.

I think, in all honesty, the Chicago show has been ruined for me a little bit. Experiencing the New York Comic Con a few months ago has taken a lot of the luster out of the old Donald E. Stephens Center. But I have to think that Wizard could be doing a bit more to salvage things on the homefront. And I'm not even necessarily talking about stuff like the caliber of guests (which were definitely better than at last year's Chicago show, but not nearly as good as NYC's) or the amount of exclusives available (presumably, there was a scheduling conflict that forced this year's show to fall before the San Diego convention, thus cutting the number of exclusives down to precisely one), although those are certainly frustrations. I'm talking about simple stuff, like organization and communication, both of which were in short supply this year.

Basically, the problem with WizardWorld Chicago is this: if you want to do anything that a lot of other people want to do, you are going to have a harder time doing it than you should. This was true in trying to get tickets for the screening of Batman: Gotham Knight (or the Alex Ross signing, or the Image founders signing, or some fourth thing I don't remember), and this was ESPECIALLY true once one got to the screening. There were lines that went every which way. The screening was overbooked by, I kid you not, probably around a HUNDRED people (or more!). It was standing room only, for an event you had to stand in a maze of lines to get tickets for anyway. That shouldn't happen. And I think the thing that galls me the most is that all Wizard would have had to do is take ONE EXTRA PERSON from their staff to seat people at Gotham Knight to fill in the gaps in seats that invariably caused at least a few people to stand... but somehow, they didn't think this was a good use of their resources. Better to let the know-nothing hired help of the Donald E. Stephens Center's own goon squad stand around and tell people where they're not supposed to be.

That is the problem with WizardWorld Chicago, and with Wizard. They don't seem to think about simple things. You'd think that a company in the business of conventions would be able to handle something as simple as a line or a crowd, but they can't. And going to New York does make a difference for me here, because it sure seems that the New York Con had their shit together a lot more... it was always clear where I was supposed to be, and I was always happy when I got there.

So that's my rant. WizardWorld Chicago is not organized well. This much seems evident to most of the attendees and dealers, who don't really have many kind words to say about it. And I do not want to disparage all of the Wizard staff, because some of them were very helpful, but somewhere along the line, I think someone needs to do their job a little better.

That said, here is the part where I'm happy... this was an AWESOME weekend. If I had gone to the Chicago show purely as a fan, I might be disappointed, but I also went for business reasons. And business was good. And the couple fan things I did, although maybe frustrating, were totally worth it... Gotham Knight is an amazing movie, totally worth standing for (and also purchasing), and meeting Brian Michael Bendis (one of my top five comic writers) was definitely satisfying. 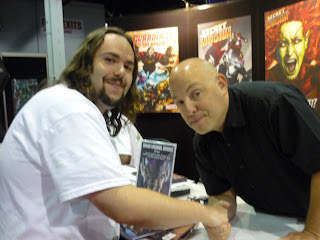 I will say, too, I think the quality of dealers at the Chicago show is better than New York (and no, I'm not saying this because Stand-Up Comics doesn't deal there). That may be due primarily to geographical factors... Chicago is more centrally located than New York and thus easier for a larger portion of the country to get to (plus it's probably cheaper to get a table in Chicago)... but at any rate, I found more variety amongst the sales floor of Chicago than in NYC. For instance, we were placed next to a really cool jewelry booth (that has a website here), and just down the aisle was a store that specialized in Japanese Transformers (see here!). Rest assured, those guys got all of my money for the weekend (and then some). I am relatively sure neither type of store was represented in New York, and if they were, I don't know... I just think Chicago has a better mix. And it may be weird to complain about booths selling nothing but comics at a comic convention, but hey, you know what they say about variety and spices.

And, oh, the company was fantastic. It obviously is not an objective measure of the quality of the Chicago convention to say this, but I had a fantastic time with the people who helped out at the booth, and this made for an all-around wonderful weekend. So, thanks to all you beautiful people! 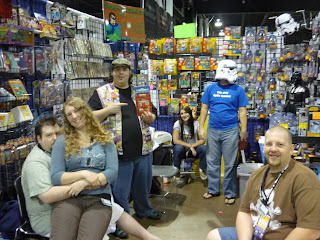 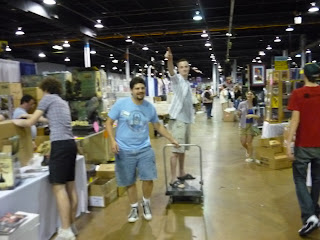 So, in closing, I'm not trying to say Chicago is a bad show or anything. I mean, it's fun to shop at, it's fun to hang out at, and it's fun to make money at. I'm just saying it could be better. And, you know, I kind of have a vested interest in the Chicago show rivaling New York and San Diego, being a Chicago local and all. Maybe that's just a pipe dream, but it couldn't hurt to try.
Posted by Eric Garneau at 8:42 PM

You know the one thing I hate about WizardWorld? Too many nerds. Jeez, get a life people.

To be honest, Marc, I felt that Artist Alley at WizardWorld was pretty much the same caliber as at the NYCC, so I didn't mention it. Granted I didn't have any friends stationed out in New York... but also, Chicago didn't have Joe Kelly. Six of one...