I'm not really a "manly" kind of guy

believe it or not. I'm not fascinated by cars. I don't drink any beer labeled with the words "Bud," "Miller," or "Coors" (well, okay... maybe Miller... if there's nothing else to drink and I really want a beer). I'm not fascinated by shooting and/or killing things. I'm not threatened by intellectual women... I think. But there is one thing I do that is totally part of the macho, manly world of man-ness. I play fantasy football.

It all happened very slowly, you see. A couple years ago was my first season with the Chicago Bears (watching them, not... you know). I started being a loyal viewer because a local bar offered a free halftime buffet during their games, and a couple of my friends invited me to go early on in the season. Well, who am I to say no to a free buffet? Needless to say, this became a near-weekly tradition. Then a year later, my friend Mark sprung a trap on me. "You watched football last year, so now you're ready for fantasy" was something like what he said (I am going to dramatize this conversation to make it seem cooler, and to make up for gaps in memory). "I don't know," was my response. "I hardly know anything, except that I like the Bears." "It's easy," he replied, "and we're just playing in an auto-draft league, so you can learn stuff as you go along." I didn't even know what "auto-draft league" meant in those days. Ah, to be young again.

I think at first I said yes just to do something fun with my friends, at Mark's insistence that it would indeed be fun. But then...

Then I started getting really into the game. I learned a little about the positions, the points, the players. And I started to win. Well, okay... the first week I lost TERRIBLY. Like, got clobbered. But THEN I started to win. The more I won, the more interested I got, and it helped that a few of the ten people in the league were equally in to it, because this pushed me to constantly check my roster and research my players to end up with, hopefully, the best possible starting team come Sunday afternoon. I ended up winning the season, though technically the final game tied between me and my friend Steve, so we had to have an unofficial playoff in which I slaughtered him.

But WHY do I find fantasy football interesting, when almost no other sports fascinate me? I mean, I'm not trying to say I think sports are boring... I'm just not a sports kind of guy. I can enjoy an occasional game of baseball, basketball I just don't find that fun, and hockey is awesome but I know dick about it. So why does football, fantasy football, intrigue me so? 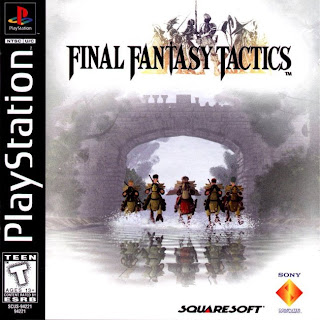 It's because I've been playing these things for years and years.

I love role-playing games. My favorites are the ones that are turned-based strategy where you move guys of different classes and abilities around a map and try to vanquish your opponents, like the above-pictured Final Fantasy Tactics. I cannot tell you how many hours I've spent playing this game. I think I've been through it three times in total, which may be a record for video games I own (at least ones more complex than Super Mario Brothers 1). It's ridiculously fun and engaging, for me in no small part because of the necessity of figuring out how character classes and abilities best compliment each other to make, if I may say so, the "winning team."

Obviously trying to figure out what weapons best compliment your resident Chemist or if you should upgrade him to a White Mage for better healing abilities is not exactly the same as deciding whether or not to sit a risky Quarterback when he's got home field advantage against an easy team but a string of off weeks behind him. But the parts of your brain engaged in making these decisions are, I think, the same. What's also the same is that thinking up strategy for these games will take over your life. You will sit at a computer and read up on tips, thinking about whether or not to risk losing your level 34 Archer with awesome equipment in a battle against an evil demon lord, or whether or not it's worth it to drop a great kicker on bye week because you don't have any other free slots and you need to pick someone up for a couple points. And in the end, I think that's what keeps me interested in these types of games... the fact that you have to think about it a lot, and that if you think about it the right way, and have some luck, you can triumph over evil (your friends) and win back the magic of the kingdom (bragging rights). 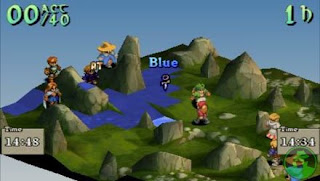 above: Drew Brees debates whether to throw downfield to Andre Johnson, or to cast Firaga on Morgana the Terrible.

And so I've gone from last year playing in a 10-team auto-draft league to this year gearing up for a 16-team, make-your-own-damn-squad slugfest. I'm really pumped, and I've started my research on who should fill what positions (bummer: no Bears are projected to be any good at anything). So, for the next few months, I will be the proud manager of the Vancouver Roughriders. And if you're wondering why I picked that name...

Awesome post Eric...mainly because of the Drew Brees picture it was about me.

Side note: I deleted my blog because most of the posts (and all future posts) involve me being drunk and then playing poker. Its too hard to remember those stories.

Aw, no more blog? Now I have a broken link in this post. ARGH!

That's sad, I enjoyed reading your blog, and it was one of the reasons I started blogging too.