because I'm seeing it twice on Friday... once at 12:01 AM and again some time in the night. The last time I did that with a movie, it was Star Wars Episode III, which I actually loved, and it was totally worth it (I should note, too, that those particular viewings were broken up by a straight-shot drive from Toronto to Champaign via Chicago at rush hour on an hour and a half of sleep. That was the first, and only, time I have had coffee).

I figured since I did my Batman: The Animated Series post last week, I should do one now about Batman in comics. Unfortunately I am not nearly as familiar with this aspect of Batman... unlike Superman, whose essential stories are all, I believe, on the printed page, it seems to me that the best Batman stories are found in some kind of motion picture, be it the cartoon or Christopher Nolan's excellent first Batman film. In addition, I haven't read a lot of what people consider the key Batman stuff... no O'Neal/Adams (I have read their Green Lantern/Green Arrow, though), no Kane/Finger, no Kane/Sprang. But I've read enough to be able to comment on my top five Batman comics stories, so I will do that now. 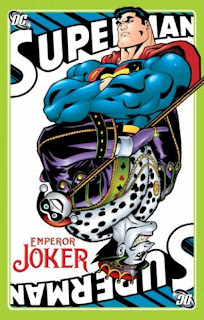 As you might have guessed from the image, Emperor Joker is a Superman story with not a whole lot of Batman in it. And yet, having read it many, many times, it's safe to say that Batman is the focus of Emperor Joker, the point on which the whole story pivots. And it's far more essential to Batman than it is to Superman (although, it is a really kick-ass Superman story).

Though Batman is in maybe 10 pages of Emperor Joker, the story reveals to us two very interesting things about Batman's world. One: that the Joker cannot exist without Batman. This is the dramatic crux of the story: Superman tells a God-powered Joker to simply imagine a world without Batman, and he can't. I'm not sure if that says more about the Joker, or about Batman, but it definitely says interesting things about the both of them.

The second thing, to me, is even more interesting: at the end of this story, after Superman's won the day, Batman is left with all the torturous pain Joker put him through while he was a god: dying every day, and resurrecting every night just to be torn to pieces again. This proves too much for Batman to bear; he actually goes insane. Superman, knowing that the world needs a Batman, does the unthinkable: he takes Batman's pain. If you couldn't tell from what I had to say about "Epilogue" in my last post, I really like stories where Batman fails... it's a great reminder that he is, after all, only human, and despite what he thinks, he can only take so much. And I also really like the idea that, though he could never know it (and Superman won't tell), his buddy Clark was essential in helping him out of a tough spot. This is a really great twist for such a willful loner character, and it's one that I think could bear a lot of fruit, if DC wasn't so interested in seemingly ignoring most of the events of Emperor Joker. 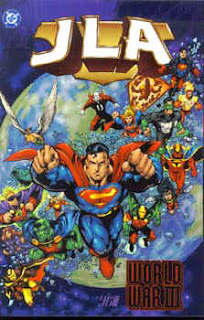 Some people didn't like what Grant Morrison did with Batman in JLA, making him a "Bat-god" who was always, somehow, on top of things. I loved it. I mean, the whole point of Morrison's JLA run was making the League into modern-day gods... why not give Batman this "power"? It's really just a logical extension of his incredible will to be the best anyway.

World War III is the absolute tops of Morrison's Batman for me, though, for mostly one reason. See, there's this part where a villain called Prometheus has stormed the Watchtower, and Batman is the last line of defense. Prometheus has the ability to upload fighting skills into his helmet, allowing him to mimic the abilities of any of the world's greatest fighters... even Batman (this, in fact, proved a "humbling" experience for Bruce before). But now Batman's ready to fight back. Using Oracle's help, Batman has uploaded a new person's set of neural and physical skills into Prometheus's helmet: 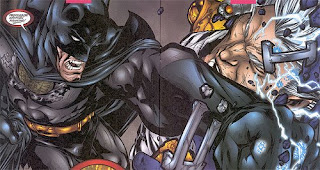 Sure, it's kind of a cheap laugh. It's also awesome. Suck it, Prometheus. 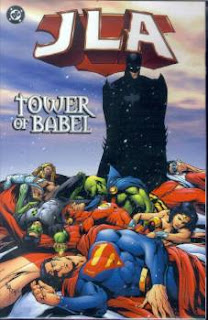 This is the story that got me reading DC Comics. In it, Ra's Al Ghul takes down the JLA using Batman's own files on how to do it. Meanwhile, he gives Batman one of the toughest choices of his life: stop Ghul's wicked plot, or allow him to use the Lazarus chambers to bring Bruce's parents back to life?

I had thought of a plot like this years before I ever read Tower of Babel... I mean, the notion of bringing Thomas and Martha Wayne back from the dead via Lazarus? Seemingly obvious, yet also inspired, and Mark Waid executes it expertly. That plus Waid's understanding of Batman's obsessiveness and general mistrust of everyone who's not him makes this just an amazing story. You've gotta read it. 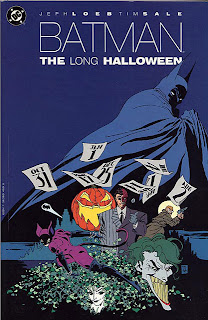 This book reads a lot like an episode of the animated series, so maybe it's cheap to pick it. Whatever. It's a great story. Tim Sale's artwork really nails the noir feel that birthed Batman in the first place, and Jeph Loeb writes an incredible and dark mystery story that will keep you engaged with the book until its very end. As a bonus, this book acts as a tour for Batman's rogue's gallery, the finest in all of comics (side note: I think it would be an interesting post to rank comics' rogues galleries. Thoughts?). It also seems to be the first place that Solomon Grundy becomes more or less a Batman villain. I always wondered why this happened, but whatever. Long Halloween is a fantastic read through and through. 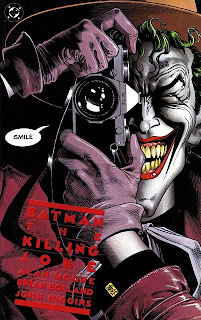 Okay, first of all: Brian Bolland could draw anything and it would probably be awesome. This book is beautiful to look at, case closed.

But more importantly: Alan Moore is one of the masters of comics--maybe their best-ever writer, as even a glimpse of his resume (Watchmen, Swamp Thing, V for Vendetta) would argue. His superhero stuff isn't always amazing. But this is. The Killing Joke is a crazily well-crafted one-shot that gives us a close-up look at the Batman-Joker relationship. It shows us just how far Joker will go in his heinous crimes, and more importantly, it shows us that his driving philosophy of insanity is wrong, that not everybody is "just one day away" from being crazy. Among the best moments in the book, for me, is when Jim Gordon, who's just been through hell, who's just seen the Joker's pictures of his daughter shot, naked, and otherwise brutalized... when Jim Gordon insists that Joker is brought in "by the book." "We have to show him that our way works!" Right on, Commissioner.

Of course there is the issue of Joker's backstory, to which this book gives a significant contribution. But even though the supposed flashbacks that cut throughout Killing Joke's narrative tell a very sad human story that seems totally believable, I prefer to think of it as just one version of the story Joker tells himself to get some kind of interpretive foothold on his life. As Joker himself says of his past, "sometimes I remember it one way, sometimes another...". My feeling is that the way Joker remembers his life at any given moment has to do with what kind of feeling he wants to evoke in himself or others... if he wants to appear sympathetic, as he does in Killing Joke, he may convince himself this story is true; if he wants to feel like a criminal mastermind, perhaps he remembers things the way a recent story-arc of Batman: Confidential has it. Though this is only one fan's guess, I think that, at present, it may be the best way to connect all the various Joker origin stories without invalidating any of them.

But anyway. The Killing Joke is awesome. If you haven't read it, please do so.

Hey!
Ever heard of the Swedish Rock band Mustasch? Great rock music! U got to check it out, trust me.
Love J