or image, if you will. How do they relate? SHOULD they? Can they NOT?

I have been thinking a lot about fashion lately... well, compared to any point previously in my life, anyway. This is mostly due to my friend Emily's fashion blog, which I have already linked to but why not do it again. Her last post over there (as you can see on my sidebar!) was about how the Fratellis dressed themselves at a New York show. Now, I'm hardly qualified to talk about the Fratellis, but someone over there made a comment that was exactly along the lines of what I was thinking... "there's something to be said for the Springsteens of the world."

(Yes, it's another post about the Boss. I'm thinking of making this Bruce Springsteen Week).

Because, see, during this whole post I was thinking "alright, is it really fair to tear up a band for not putting a lot of thought into their dress?" And I was trying to think of all the fashion-less bands and artists out there, and about how good music doesn't require good fashion sense.

And it's very telling that the first artist who popped into my mind was Springsteen.

This is telling because one's knee-jerk reaction (like mine) is to say "obviously Bruce is fashionless. He wears jeans and t-shirts or overalls. He dresses like the good ole boys in Youngstown, PA or Asbury Park, NJ." I daresay that this is the most famous image of Bruce's, well, image, the one everyone conjures up when they think of his fashion: 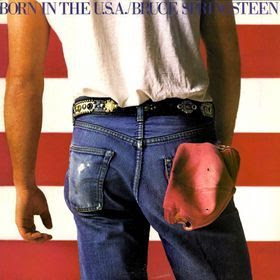 Jeans, a t-shirt, and a red baseball cap. Is he going to rock Yankee Stadium or is he going to watch his kids play baseball? Hey, he's the Boss. He can do both!

But there's an obvious flaw in thinking Bruce is fashionless: he wants you to see him this way. This is his image, just as much as Ozzy's is looking like a vampire, and Britney's is looking like (?) a tramp (yes, I took that from a comment I made on Emily's blog before I decided to write up this post. Sue me).

For most people, this can probably go unsaid; of course Bruce has constructed this image, it's good marketing. But the funny thing is that for me and at least one other person interested in the relationship between rock and fashion, we still jump to this image without thinking and label Bruce as a "fashionless" rock-star.

Now, this is not to knock the Boss (whom, obviously, I love). But some people, like my aforementioned friend Jim, are really put off by this. Jim's words: "I don't buy that whole working-man shit." In other words: Bruce pretends to be someone he's not by embodying the blue-collar man in word and dress, and this is a lifestyle he couldn't possibly know about. Well, okay. I'm not sure how well that criticism holds up. Does Metallica know anything about fighting ancient monsters or bringing death to villages? Doubt it. Is David Bowie really an alien? Hell, he's not even an astronaut! Bruce's blue-collar songwriting perspective is just an adopted character like any other. The most one can say is that it's slightly more tricky than most adopted characters, because it's less of a stretch than Alice Cooper as a demon from hell or Dave Mustaine as a sociologist. But only a little less.

See, almost every good songwriter adopts a persona (or several!). The only genre I can think of that shies away from this completely is emo, and you know what? Emo is fucking boring. I could care less about the bad day you had, dude. They Might Be Giants can write better, sadder songs in their sleep, and they're using their imagination to do it. Being able to write songs from a perspective not your own is simply more interesting, more inspired, and more complimentary to an artist's creativity. There's nothing "dishonest" about it. It is a basic tenet of writing that this is the case--one would not expect Stephen King novels, for instance, to be about what Mr. King does for a daily routine.

So it's silly to expect that rock stars would not adopt some kind of persona. And, following that, it only makes sense that rock stars would adopt a fashion to fit this persona. Some genres along those lines are obvious: goth, new wave, hair (really anything from the 80s!), punk. Some take the Springsteen route to make you think they don't care, like the grunge movement of the 90s. But, you know, they care a lot. See, any band who consciously shuns fashion is thus adopting it, because they have to try to dress in such a way that shows that dress doesn't matter. Medieval Italian courts called this sprezzatura. Modern rockers might call it "the Kurt Cobain."

I'm sure that there are bands out there that are more or less, to use a term in Emily's arsenal, "fashion-invisible," that don't make any kind of fashion statement for or against. This would probably be most indie bands; I couldn't tell you how The New Pornographers dress in relation to any persona, just that they're awesome (and that, whatever Neko Case wears, it should be less). So maybe that is an example of music speaking for itself. But even in that case, those artists have to choose to just dress like they want, go out on stage, and rock, and thus the fashion is a personal choice, not a group one. But there is still a larger group dynamic in play, an umbrella under which all band members choose their wardrobe; either spoken or not, The New Pornographers have agreed to all dress like 30-something hipsters that let music speak for itself; if Kurt Dahle decided to wear a robot suit, Carl Newman would probably shoot this down (this is probably why Statements Lost was upset when I wore faux-leather pants when playing with them. But damn it, it was funny).

The point is that it seems like when it comes to rock-n-roll, there's no such thing as "fashionless." And while those of us who live without fashion (like me) may at first balk at this, that's really the only way things could be. Would Bruce Springsteen be as compelling in a suit and tie? Definitely not. Would you want to see Jenny Lewis in jeans and a t-shirt? Not when the other option is a cocktail dress. Fashion... image... is just another way to get at the themes behind an artist's work. It's an interesting point because, I think, so many of us consciously choose not to care about how musicians look when we embrace their music... but maybe this choice is in error.

There is at least one definite and immediate upside to this rock-fashion consciousness. One need only look at Fall-Out Boy to know they suck.
Posted by Eric Garneau at 5:41 PM