I'd Drive All Night

just to listen to some Bruce Springsteen.

I was out in the far western Chicago suburbs yesterday (Sandwich, Oswego and Yorkville to be precise) to do a couple cool things, not the least of which was see Blackened, a Metallica cover band that my buddy Jim is in. They are pretty awesome, and Jim is a crazily-talented lead guitarist... I recommend checking them out. I didn't leave their show until midnight (which was the halfway point!... I had to get up for work early today). And while nighttime driving is not always the most fun from a safety standpoint, it affords me an enjoyable opportunity that some may chalk up to mild neuroses but what do they know?!... I love picking music to drive to at night. Further, after many many moonlight trips, I have found that one artist excels at providing a soundtrack for the road under the stars, and, as you may have guessed, that is none other than the Boss.

Now, don't get me wrong. I love Bruce Springsteen in any context. I think he is one of the great voices in American rock-and-roll, if not the greatest. But something about him just... resonates...in the nighttime. I don't know what it is, but I can't really listen to something like Magic or Devils and Dust when the sun is out.

But, as awesome as those albums are (especially Magic), there is one Bruce album that, to me, is king of the night-time driving routine, and it is this: 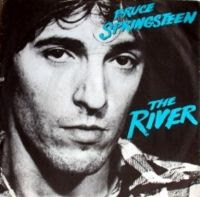 Yes, The River has been my traveling companion countless times in the past year, and I haven't gotten tired of in. In fact, I seem to discover something new I like about it every time I listen... kind of like having a good conversation with an old friend. For instance, just last night I finally got into track 18, "The Price You Pay," and really began to see it as the beautiful piece of songwriting it really is.

I'm not sure what makes The River so ideal for a night-driving situation. There are certain empirical factors, to be sure. The fact that it was originally a double-album (back in the days of vinyl, can you believe it?!), for instance, makes it sufficiently long--a little over 80 minutes--to knock out long stretches of road. But I think in the end the only satisfactory answer is that this album feels right to drive to. It exhibits incredible pacing that weaves together some of Bruce's most intense rock songs and his most sensitive ballads expertly. I mean, just listen to disc one, side one--"The Ties That Bind" has got to be one of Springsteen's most kick-ass songs, and it gives you a great shot of adrenaline to get that drive going. That fast pace continues on through "Sherry Darling," "Jackson Cage," and "Two Hearts" before any sign of slowing down with "Independence Day." But then, over on side two (side note: what's nice about MP3 players is you don't have to flip records over. Look into that, guys!) we get another huge burst of energy with "Hungry Heart," "Out on the Streets" (this album's second-best tune behind "The Ties That Bind," in my humble opinion), "Crush On You," and "You Can Look (But You Better Not Touch)." This side, too, closes with poignancy, but this time with two ballads ("I Wanna Marry You" and the titular track), which pave the way for the slower, more reflective second disc, which actually almost inverts the number of rockers to ballads (first disc: 8 to 3, second disc: 3 to 6).

And, the second disc is really pretty. Like, usually I hate when rock-stars oversaturate albums with ballads to try to be, I don't know, more mature (see: Bon Jovi). But these ballads are great. They are legitimately moving, powerful songs. I won't go through disc two cut-by-cut, but I do want to mention that for me this album climaxes with the second-to-last track, "Drive All Night," which was featured in the movie Reign O'er Me (which, actually, is responsible for turning me on to this album). Maybe because I associate it with a sad scene in a sad movie, I find this song to be one of the most emotional tunes ever to be constructed in the rock milieu. I think that, if you were feeling especially sentimental, it might actually be tough to get through this whole song dry-eyed.

Maybe it seems silly that my best "night time driving record" would be one which front-loads its power and eventually turns reflective, almost sad. Does that really carry me through the night? Well, yes. See, I think The River hooks you with its rock, and then draws you in with its ballads, making a wholly immersing, wonderful listening experience. More albums need to be constructed with this cohesion. By the time you're on to the second disc, you don't need high-octane rock songs to get you through the drive. You're part of the Boss's world for a rich 80 minutes... a world where all of America is laid out in front of you, waiting to be explored, yet perhaps the richest story is the one right inside your car...

Oh, yeah. Having a song called "Drive All Night" also kind of solidifies the River/nighttime driving connection too. Just sayin'.

Interesting. Never one to check the boss out before, but I might do it now. In terms of my night driving music... Automatic for the People by REM comes to mind.

Believe it or not I only have the R.E.M. greatest hits... and I only bought those a few months ago! They're a band I know I need to get into, and a quick look at AllMusic shows that this does indeed look like a sweet album... I'll check it out in exchange for you looking at The River. :)