Here are some things I learned from Las Vegas.

1. The two best places to eat in Las Vegas if you are not rich are Ellis Island for the $6.95 steak dinner and the Rio Carnival World buffet. I actually already thought this already, but this trip confirmed it.

3. The Bellagio has a really nice display of flowers in its lobby. ... What?!

4. Fort Wayne is an infinitely worse place for a retailer summit. The two Diamond summits we've gone to in the past were way more gaming-focused than this one, probably because Alliance Game Distributors is based out of Fort Wayne. At this summit, people actually talked about things we care for... COMICS! Also the free swag was geared a lot more toward a store like ours. And there was TALENT. On hand for the weekend: Brian Michael Bendis, Billy Tucci, Terry Moore and Jimmy Palmiotti. Which leads me to point four...

5. Jimmy Palmiotti is an incredibly awesome guy. I'm not a real big fan of his writing, I must admit (Countdown soured me on a LOT of people). But he's a really good artist, and on top of it, he may be the nicest comics professional I've ever met. He was signing promo copies of his new Jonah Hex issue at the DC booth Monday and I sheepishly asked him if he wouldn't mind signing my Kevin Smith Daredevil trade, which he did the art for. Not only did he sign the thing but, without me even asking, he drew a sketch of Daredevil on the front inside cover! It was incredible, man. Jimmy Palmiotti, you rock. 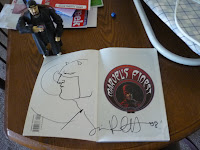 6. Indie comics need more support. This summit filled me with an intense desire to stock more Dark Horse, Image, and other third-party titles. I think it's partially because these companies make a real effort to talk to the retailers, explain where they're coming from, and help us out with promotional material. Dark Horse, especially, are great guys with great products. The company that impressed me the most, though, was... 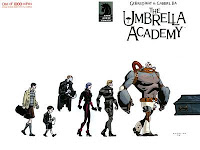 7. Radical Comics needs to be famous now. I'd venture most of us haven't even heard of Radical Comics. That is a sin that Stand-Up Comics intends to rectify post-haste. Radical's only had a couple series out thus far... Hercules and Caliber, a western retelling of the Arthurian story. Take a look at these books. From a purely visual standpoint, they are beautiful. Radical was kind enough to give us free copies of the complete series so we can read them and see how the story is, but I'm guessing from the level of care they put into their product that it is awesome as well. They have a lot of great books coming down the pipeline, which Stand-Up will be carrying and promoting. On top of that they are really superb people that truly care about the business and are also very friendly (they even gave me some fantasy football tips... in fact I didn't understand what a RB/WR truly was til I talked to some of their staff). It is a mark of a really invested business that when they ran out of free copies of their books Monday, they had someone drive up from LA with a truckload to pass out on Tuesday. I'd have to say that Radical had the most impressive showing at the Vegas Summit. On the other end there is... 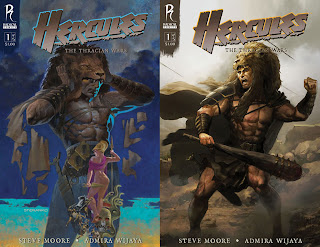 8. Marvel Comics just doesn't care about retailers. They had almost zero presence at this show, including a booth that had but two folded-up promo posters thrown across it, and almost no staff. They will make excuses as to why their booth was completely empty all weekend. "There was miscommunication with Diamond" was the party line. Hm. Well, they knew when the show was, and they knew when their PEOPLE should be there... why not their display? And if Radical, a super-indie company, can have their guys drive free shit out to Vegas on a few hours' notice, can't Marvel do a little something? Listen, I felt a little bad for Marvel because they totally got attacked at breakfast on Tuesday (the supplier Q&A)... late books was the topic, and the crowd of retailers was angrily yelling that editors need to do their jobs better, even being fired if they miss a deadline for a death in the family or something like that. That is a little extreme, but it does touch on the point that Marvel, as a company, does not seem to have their shit together. And it's really telling that the rep Marvel sent to this convention, David Gabriel, would not address the issue of late books at all, instead passing the buck to editorial. Well, David, you're the rep to the stores here. You need to be able to say something other than "it's not my fault," which is really all you were interested in saying... about anything. The thing is that Marvel has us by the balls because almost every comics store anywhere has a devoted throng of Marvel Zombies banging at their doors for the latest drawn-out crossover. But if Marvel was an indie company, I'd say they'd be doomed to failure. Thumbs down.

9. DC has a really interesting Sgt. Rock series coming out. I never would have thought I'd want to read a Sgt. Rock book, but here we are. Billy Tucci's got a series in the works about a group of Japanese soldiers from WW2 that have to go in and save Rock and co. when they get trapped in a bad place. It's called Sgt. Rock: The Lost Battalion. This is based on a truly story of a Japanese regiment that always got the shit jobs because that's what the US government thought they were good for in that era. The amazing thing is that, to help promote this book, Tucci and DC brought a couple of this regiment's surviving members, and one of them even signed promotional posters with Tucci. I'm not gonna lie, this was really moving... and damn good promotion too.

10. I think I can tell prostitutes apart from other scantily-clad women. I'm gonna say it's the high-heels. Not many people would choose to wear high-heels while walking down the Strip, right?
Posted by Eric Garneau at 10:35 AM

I think I can tell prostitutes apart from other scantily-clad women.

And here I thought all women were prostitutes...