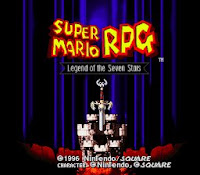 This makes me really happy. Do you guys remember this game? It is wicked fun. Me and a few friends were obsessed with it in junior high. As you might have garnered from my earlier post on (Final) Fantasy Football, I am a bit of an RPG nerd. I am also a Nintendo nerd (there's a reason the Wii was the first of the current-gen systems I bought--I love Nintendo's characters!). So combining the two... how can you go wrong?

I mean, really. I thought maybe there was some nostalgia-colored glasses making me love this game, but I just spent about an hour playing it, and it truly does a great job, in my opinion, of combining the Mario franchise with tropes of an RPG. Everything from play style right down to the music is an interesting mix of these two worlds. And it's a Square game from the 90s, which probably means it's excellent anyway (among my top five video games is Final Fantasy VI/III US, released by Square in 1994... this decade also saw Final Fantasy IV, Final Fantasy V, Secret of Mana, Chrono Trigger, Secret of Evermore, Final Fantasy VII, Final Fantasy Tactics, Xenogears, Chrono Cross, and Final Fantasy VIII... okay, let's forget about that last one).

And this game was more or less unavailable to those of tiny pocketbooks until a couple days ago... a quick search of eBay shows it's gonna cost you about $50 to gamble on a used copy and $100 to get a mint-in-package version. Of course it's only $8 on the Wii. This is, obviously, a steal.

Nine times out of ten, if you ask me what I think the best current-gen gaming console is, I'll say XBox 360... which is probably the right answer. But the Wii definitely has its benefits, and the virtual console is one of the big ones. The ability to play classic games for relatively cheap is pretty stellar, especially when it's classic games you haven't seen for years. Good job on this one, Nintendo.
Posted by Eric Garneau at 9:52 AM