Man, I am SO glad Obama won the presidency.

Now I won't feel silly for wearing this shirt for at least four more years. 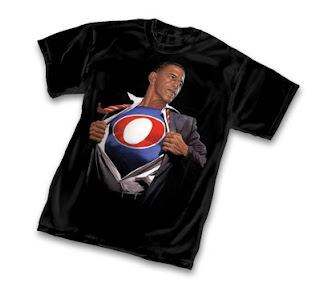 ... Actually, you know what... I was gonna leave this post as a joke but fuck it. I'm gonna be serious for a second.

The shirt above, while awesome, is also incredibly apt. Artist Alex Ross knew exactly what he was doing when he cast Barack Obama in a (the?) classic Superman pose. See, to people like me and Alex Ross Superman stands for one thing above all else--hope (don't believe me? Read his Kingdom Come). And following Obama's campaign and watching his amazing acceptance speech just now, it is incredibly clear that above all else this is what Barack Obama stands for too--hope that we can elevate ourselves out of our economic and social drudgery and move ourselves ever closer to the perfect America we all feel we can be. There is one key difference between Superman and Obama, of course--while Superman can only inspire change, Obama can actually affect it as well. He kid about it in his campaign but I kind of feel like it's true--it seems that we have a version of Kal-El as our president for at least the next four years.

On an interesting related note, at the end of the Obama rally in Chicago's Grant Park, after the President-Elect and his VP's families came out to greet the crowd, I heard a familiar song coming over the TV through the park's PA system. It was "The Rising" by Bruce Springsteen, off The Boss' post-9/11 album of the same name. If you read my blog regularly or know me, you'll know that Springsteen is one of my favorite musical artists. I never really made the connection before but, just like Superman and just like Barack Obama, what Springsteen seems to care about most is hope. Sure many of his songs are full of tragic characters and situations, but anyone really familiar with his body of work will know that almost every one of his songs is about getting out, getting away from that tragedy... rising above it, if you will. My very politically active friend Craig (who actually worked on Obama's state senate campaign at the beginning of his career) told me that his favorite Springsteen lines are from the song "Badlands" (my favorite Bruce song, FYI) and it's this bridge:

For the ones who had a notion, a notion deep inside
That it ain't no sin to be glad you're alive
I wanna find one face that ain't lookin' through me
I wanna find one place, I wanna spit in the face of these badlands

I think what we have done tonight, America, is elect the man who is going to do that (metaphorical) spitting. We'll come on up for the rising, we'll save the world from threats both at home and abroad. We've elected the spirits of Bruce Frederick Joseph Springsteen of Long Branch, New Jersey, and of Clark Kent of Krypton and Smallville, Kansas. We've elected Barack Obama, and at least for one night the nation's got an injection of hope that it so desperately needs. I can't wait to see where we go from here.
Posted by Eric Garneau at 11:29 PM

They should have played "Tom Sawyer" by Rush. That would have got the crowd going.

But if any band was gonna be brave enough to risk it, it would be Rush.

Though his mind is not for rent,
Dont put him down as arrogant.
His reserve, a quiet defense,
Riding out the days events.
The river

The world is, the world is,
Love and life are deep,
Maybe as his eyes are wide.

Todays Barack Obama,
He gets high on you,
And the space he invades
He gets by on you.

No, his mind is not for rent
To any God or government.
Always hopeful, yet discontent,
He knows changes arent permanent,
But change is.

The world is, the world is,
Love and life are deep,
Maybe as his skies are wide.

Exit the warrior,
Todays Barack Obama,
He gets high on you,
And the energy you trade,
He gets right on to the friction of the day.

Dude. That is commitment. Well done.