and it isn't up yet. Apparently there are technical difficulties. Rumor has it there are problems with the song "YYZ," which has no vocal track. This leaves me bored. This also leaves me with time to post, so I'm gonna do one up that I'd been thinking about for awhile. I already listed my top 5 songs for the forthcoming Rock Band 2... but right now I'd like to take a look back and name my top 10 DLC (that's downloadable content) for Rock Band 1. These are songs that I feel are so awesome that it is a sin to not have them in your RB1 collection (unless you have the game on the PS2 or Wii... in which case, you don't really have a choice. Sorry guys):

10. Vesuivius, "The Promised Land" -- I must be a shitty movie critic, because The Rocker totally bombed, failing even to make it into the top 10 weekend movies (it got beat by Death Race and The House Bunny?!). Still, I love the movie, and I love this song, a free download to help promote the film (again, an obvious failure). This is the first really "hairy" track in the game and it truly lets you rock out arena-style on the drums, which also facilitates the aping of Rainn Wilson's previously-mentioned rock faces.

9. The Cars, "Just What I Needed" -- Awesome song, really fun to drum. It's got a driving rhythm and I always feel like a rock star when I hit the crash cymbals in the chorus. Singing it is a blast too.

8. Bang Camaro, "Rock Rebellion" -- Any Bang Camaro song is awesome, obviously. It's unfortunate that the Rock Band mic really hates more than one person singing into it, because this is the kind of song you need a dozen or so people to belt out (especially if some of those people know the harmonies!).

7. Oasis, "Don't Look Back in Anger" -- The funny thing is I didn't really like this song til I was playing with my friend Todd and it came up as the second to last song in a random setlist. Todd pointed out that it was awesome to put a ballad right before the end, which hopefully would end up being a rocker (it did). It was at that point I realized that Rock Band is short on true ballads, thus making this song important to the game. It is also super-fun to drum, giving some of the best/most doable fills of all the songs available, in my opinion. When this song inevitably gets played at Rock Band parties, I make sure I'm behind the drum kit.

6. Boston, "Peace of Mind" -- Another song with a really driving rhythm, it's just EXCITING. Pretty much every part is good for this song, although my first choices are drums or guitar (I love singing it but Boston singer Brad Delp hits some ungodly notes in there). Even though this clearly isn't the biggest song in Boston's excellent catalog, it is my favorite.

5. The Police, "Roxanne" -- I tend not to play this song a lot, but I get a perverse thrill from watching lots of my friends do it. This tune is a great party song that almost everyone knows and that any man with balls (metaphorically, perhaps not literally) will attempt to belt out just like the Stingster. In particular, this song makes my list because of my friend Craig's rendition of it. Too cool.

4. The Who, "Baba O'Riley" -- Though I was slightly dissapointed with the Who mega-pack, one cannot deny the epicness (sorry to use such an internet term) of this song. Once Rock Band 2 comes out and you have the ability to make your own setlist for almost anything you do, I reckon this song will go at the start of a great portion of those setlists. I mean, that intro alone... man. It gets you pumped.

3. Boston, "More than a Feeling" -- Even though "Peace of Mind" is my favorite Boston song, I think "More Than a Feeling" is more essential to a Rock Band library because more people, by far, know it, and like "Roxanne," that will make more people attempt to sing it. Unlike "Roxanne," this song also has awesome instrument parts for everyone involved (my favorite is probably guitar). It is a joy for this to come up at Rock Band parties when my friend Dwight is there, because he will sing it and he will crush it (even hitting the high note near the end of the song... it is truly impressive).

2. The Police, "Message in a Bottle" -- The second-best memory I have from one of my Rock Band parties is seeing five people crowded around the mic belting out the seemingly endless outro words "sending out an SOS!" This was too cool. In fact, here's a picture: 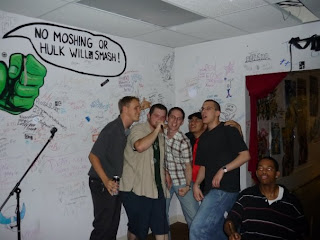 So, yeah, this song has one of those infectious vocal lines that almost anyone can take a crack at. It also has, in my opinion, the most fun drum part in the entire game. It's a winner all-around.

1. Oasis, "Wonderwall" -- But my favorite Rock Band party moment is due to this song. Some folks were playing in another room while me and some friends were gathered around a poker table. All of a sudden, this song starts... and poker stops. We all start singing along. There must have been at least 10 people in on this. It was pretty amazing. And not only that, but I think that bringing people together like that is kind of what rock and roll is all about. For Rock Band to imitate that aspect of the rock music experience is impressive. And the sheer fact that "Wonderwall" is probably the best-known, most singable song of all the Rock Band DLC means that it, without a doubt, takes my number one spot.

A quick check of the Rockband.com forums show that "Moving Pictures" still isn't up... damn it.

Rush is awesome.
Posted by Eric Garneau at 8:55 AM

That IS a cool interview. Thanks! I love that someone thought Bang Camaro's music might somehow relate to the war in Iraq... can you imagine if politics and hair metal mixed?

If it is indeed Douchebag City, who is the mayor?